Over the weekend I built a Zombie Dice Score Card. I built it because I keep forgetting to get pen and paper for keeping score but mostly because I wanted to build something simple in ClojureScript again. 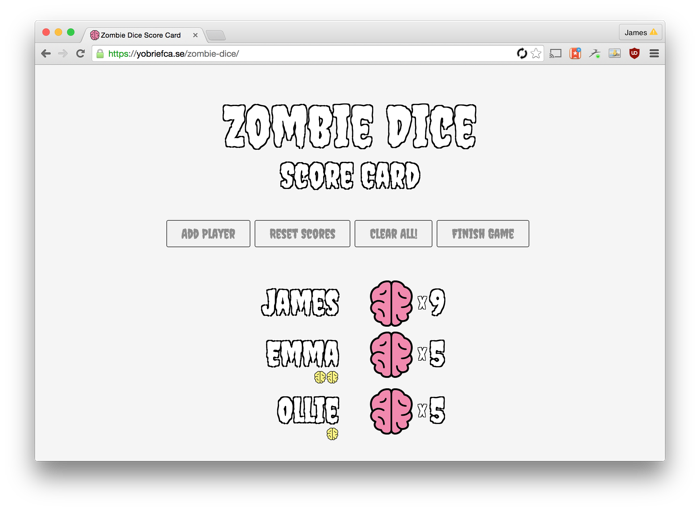 The app is pretty basic, no server side interaction, no local storage interaction and only a few basic actions/features. You simply,

For the curious the stack used is as follows,

This is a nice little template for prototyping with ClojureScript or in situations where you can integrate with external services for your server side needs. It's a conditional template that lets you add technologies that you think you'll need. For example I generated the Zombie Dice Score Card project with,

This template gives me an app with SASS, Reagent and Divshot configuration and all the necessary build pipeline stuff set up to compile CLJS and SASS when files change. I didn't use Divshot this time around but it's nice to know the option was there.

On another note I did find it a bit weird using Leiningen to generate a Boot application but I guess most Clojure(Script) developers are going to have Leiningen available and Boot doesn't provide templating support.

I didn't need to dive into Boot too much for this tiny project but I do like what I see. The way tasks are defined in Clojure and composed into pipelines using standard Clojure idioms makes creating build pipelines really rather nice.

Aside from a name change Reagent (formerly Cloact) hasn't really change that much since I talked about in January 2014. Sure they've added some new features and refined the API a bit but its approach is still the same. It provides simple approach to using React in a ClojureScript app offering us hiccup style syntax for declaring components along side atoms for state management.

I've never really looked into the other React wrappers so I can't speak to whether Reagent is the best but I can say it's certainly been a pleasure to use on small scale apps.

The source for the app is available, as always, on Github and I welcome any feedback or advice you may have.

I think I'm going to write this in Elm just to see what all the fuss is about. Maybe add some local storage for saving historical games and players. Truth be told I'll probably never touch it again but a man can dream.

Have you ever played Zombie Dice? If not you should give it a go it's a simple, quick dice based game that you can explain in about 3 minutes and have a full game done in about 15 or 20 minutes. The aim is simple, try and collect/eat 13 brains by rolling dice over a series of rounds. Once someone hits 13 brains everyone finishes that round and the person that has the highest score wins that game. Typically you play best of 3 or 5 games.