As an organisation grows the way by which culture is formed and played out changes. In companies with smaller numbers - culture is more organic, typically people are like-minded and share a similar goal. As a company grows and diversifies (different products, projects or locations) culture becomes more broken down or siloed across the projects or locations. Typically speaking companies of this size share a common structure - top-down whereby key strategic decisions come from the top down.

Culture is different, culture comes from the people that interact with the company the most - the lower levels of the org chart were head count is greater and interaction is more inward. Project teams typically form their own unique cultures but these aren't reflected at a more broader company level and are often short lived as people move around the company.

But culture, at an organisation level, is a key differentiator for a company. Culture defines the type of people that work in your organisation. This isn't news to anyone. Companies know this, but it's how these companies deal with this determines what culture is actually formed.

In my travels I've come to group companies into three distinct bucket categories when it comes to how they support or react to technical culture, 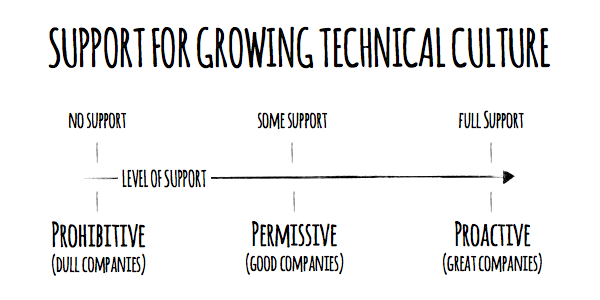 Some companies attempt to stimulate technical culture the same way they run their business - by pushing mandates from on high. Forcing culture is doomed from the offset. For example - I know of a large IT company that wanted to hire more developers. The powers that be had heard that developers like hackathons so they decreed that the company shall run an internal hack event to promote their engineering division. It was a marketing ploy and like all marketing work it was handled by marketing. Marketing picked the problem to solve , marketing picked the participants (Solution & Technical Architects that represented the brand) and wrote the story before the event took place. That was the last anyone heard of it - I'm not even sure if the event even happened. To most people that hear this story and hear the name of the company it's of little surprise.

The point is you can't create culture that defies how you allow people to work.

Better companies are more permissive, they provide financial support and/or time for internal initiatives. This is much better than trying to force anything but it still has its problems. I've already mentioned that culture flows in a different direction to strategic company decisions so being permissive is only part way there. An employee asking for support to run an event can feel like going against the grain and if it happens at all still needs to be justified exactly like all business decisions (whats the return on investment, how do we measure the success etc.). Problem is culture is so fuzzy and unpredictable its hard to come up with an answer that isn't just nonsense. This all creates friction and cultural change is hard enough without extra impediments.

The best IT companies are not only permissive but senior level people are proactive and open about supporting a technical culture. Rather than the management of culture that happens in permissive companies, great companies lead culture. They instil a "go do" attitude in people rather than "ask first". They do this by being proactive in letting people know what they can do, they see culture forming and actively push that up, they allow failure. Rather than seeking funding for something, funds are made available up front. If someone decided to run an impromptu hack session on a new technology after work and expensed a couple of pizzas there would be no questions asked. I'm a firm believer in the old adage of "It's better to seek forgiveness than to ask for permission" and great companies usually are too. When you have a culture that the people directly affected by that culture can control, you'll have happy people. Not only that but you'll have the right type of happy people.

My current employer, who are actively growing, recently published some material to highlight their internal culture and the thing that struck me about this material was that two of our culture differentiators as a company was hackathons and CodeSlice (a monthly out-of-hours tech meet up) and I'm rather proud to admit that both of those initiatives came from myself and a bunch of other ne'er-do-wellers (Will Hamill, Jonny Holmes & Luke McNeice). All it took was a few short emails to our CTO and we were in business. That was 2 years ago and since then various parties have been championing CodeSlice on a near monthly basis (which spawned similar in other locations), ran 4 internal hacks (which also spawned others in other locations), been key organisers at 2 external hack events and had teams attend a number of other hack events (notably the NHS Hack Days). You can't buy that sort of enthusiasm but you can nurture it and let it grow.